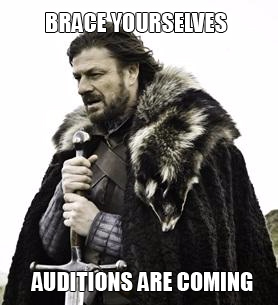 7 Tips To Help You Ace Your Fall Auditions

It’s time again to create lasting friendships, and hopefully, viral YouTube videos with the incoming class of eager students and the seasoned a cappella members who have been owning ICCA. But let’s not put the cart before the horse. The first crucial step in any of this is actually getting accepted into a group.

As a previous founding member and president of a collegiate a cappella group, I’ve been a part of many auditions. Some featuring jaw-dropping talent, some comedic, and then those who needed to spend a little more time sharpening their skills.

Here are seven ways you can be better prepared to ace your Fall auditions and hopefully ascend to a cappella stardom, at least on-campus.

If you are lucky enough to be attending a college or university that has more than one a cappella group, do yourself a favor and audition for multiple groups.
Sometimes groups are looking for particular voice parts and many not advertise it, or talent for the premiere group is really competitive this year. In either case, have a backup plan. Who knows, you may end up liking another group who wasn’t on your radar.


2. Pay close attention to what the audition asks for

The majority of college groups usually tend to cover Top 40s, with the occasional branching out towards sacred, classic hits, or another style depending on gig requests. This is my attempt to say, “know what the group is looking for” and show how you can add to this. If the group covers predominately RnB do not come prepared with a show tunes solo, or if they are rooted in Jewish-styled music, do not come with a Taylor Swift cover. Do your research!


3. Be sure to not only audition, but to showcase personality

Yes, it is important to find the best singers during audition week, but what’s even more important is displaying who you are on a personal level. There were numerous times during past auditions where my group decided to axe potential candidates simply because we felt their personality wouldn’t mesh with those of current group members.


4. Being an expert level sight-reader is not a requirement

More than anything, I hear those who are new to a cappella groups, or organized singing in general stress out over sight-reading during an audition. Would groups love 12 members who are proficient at reading sheet music? Of course, who wouldn’t? But the reality is that collegiate groups are diverse groups of people with varied backgrounds. Some are decent, while others are great at sight-reading, many are even auditory learners. Be honest with the group and express how you’re willing to pull your weight in any case.


5. Remember that auditions are a two-way street

Auditions are not simply for groups to decide on who to add to their current rosters, but also for those auditioning to determine where they would fit best. Use an audition, and hopefully the callback to gauge the personality of group members, the way the group is organized and ran, and really ask yourself if you could spend the next 4 years being a part of this organization.

Unless the group you’re auditioning for is flat out rude and makes a snide remark about your abilities, do not take the final cuts personally. Often groups are tasked with selecting two or three voices from a pool of dozens. Tough decisions have to be made, sometimes involving cutting friends or family members of current members (I’m speaking from experience). In any case, if you don’t make it this year, go home and work your butt off till next year.


7. If all else fails, start your own group

Bombed your audition, or simply want to avoid the whole process altogether? Then start your own group. Maybe none of the campus groups are offering what you’re looking for. Starting a group can be a great way to create your own unique collegiate experience, filled with new traditions and excitement that you and others can claim credit for.


Acing an audition isn't always easy, but can definitely be less stressful if you're aware of what to expect. Spend the necessary time preparing, then go in and have fun. If you follow these tips, you'll walk away satisfied, hopefully with groups texting or calling you for callbacks!