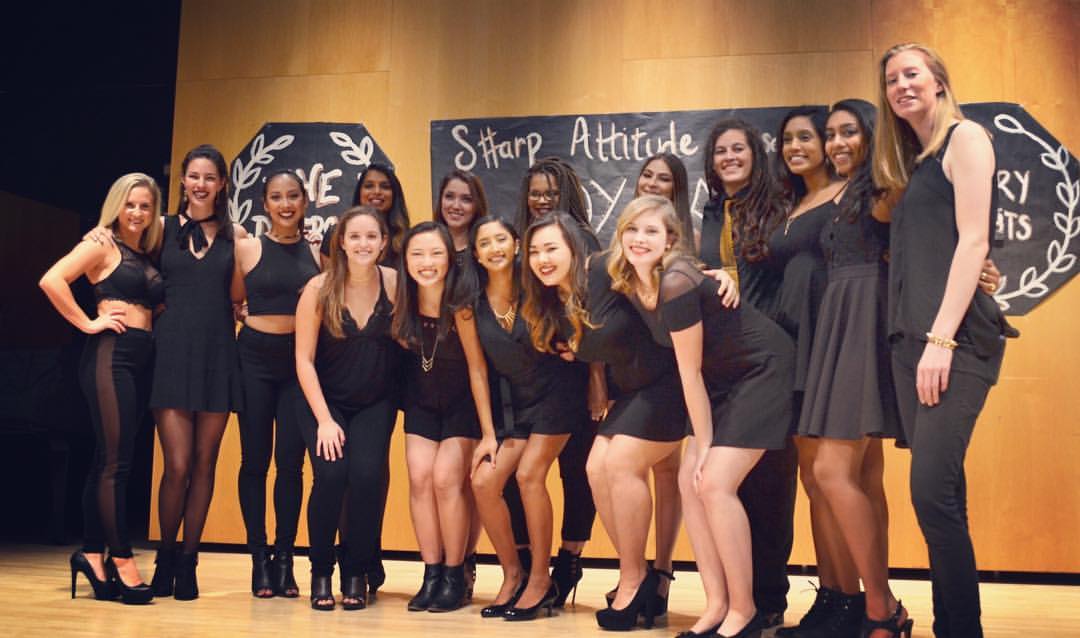 Since 2011, S#arp Attitude has been gracing the University of Massachusetts-Amherst campus with sassy chords and gutsy arrangements. Even in the midst of other prominent, all-female groups, the ladies have been establishing themselves as one-of-a-kind. Last year, S#arp Attitude ascended to new heights with their appearance on season 2 of PopTV's Sing It On. While the group did not win the coveted trophy, they became closer and go into competition more the wiser and plan on bringing even more "attitude."

In this interview, we sit down with the group's Music Director to discuss last season's ICCA, Sing It On, and insight on what to expect from the ladies this time around.


1. Some groups wait years before making the plunge into competitive a cappella, while others forego the idea completely. What lead S#arp Attitude to make the decision to compete in the ICCAs and continuing to do it for another year?

Initially, we didn’t think we wanted to compete in the 2017 ICCA competition.
Our experience last year took a toll on the group and we fully considered taking a break, especially because our prep for the competition was combined with filming for Season 2 of Sing It On. However, recording our album this summer with The Vocal Company (TVC) was really refreshing and completely changed us for the better.

Our friends at TVC inspired us to consider the fact that we bring something different to competition and our message is important. With the acceptance of five new and young members in the fall, we felt a new energy about us and decided that crafting an ICCA set could help us explore this newfound potential.

2. As a group whose been in the ICCA spotlight with your appearance on last season's Sing It On, do you feel that added an extra element of pressure to the competition? Or did it have the complete opposite effect? How did you all handle the constant attention?

While filming and being featured on Sing It On was an amazing experience, it was definitely stressful. We filmed the entire week before competition, which is normally supposed to be a low stress week for us where we polish and fine tune the set. Instead, we were filming rehearsals every night and redoing choreography and starting and stopping our set again and again for the cameras.

So many people believe that being featured on the show gives you an advantage, but this wasn’t the case for us. The day of the competition, we were only able to fully run our set vocally, with all of our members, once. Once! We weren’t able to run any choreo except during our sound check.
Our members were constantly pulled out of the room to do interviews, and it got really stressful when we couldn’t have some solid group bonding time because we were being filmed. However, I fully believe that the pressure of being televised brought elevated our group to a new level. We now hold ourselves to a different standard.
All in all, we are happy and grateful for the experience of Sing It On. The attention has been tough to deal with since some viewers have freely and rightfully, but bluntly expressed their opinions surrounding a femme, all-female identified group of singers. But we are fully devoted to what we do and stand by everything about the experience. We know who we are as a group of singers, and that’s all that matters to us.

3. The ICCAs have evolved over the years, since its founding in the 90s. With that has come a change in the way groups present a set to the judges. For some, it's about show stopping numbers, while other groups have more of a story arc to their set. Both have been well-received over the years. Which do you think is more important when it comes to the ICCAs: jaw-dropping numbers or having your set tell a story?

As the music director, I believe whichever option works for your group is the most important when it comes to picking a set for any competition. Last year, our set was more of the show stopping number type, whereas this year, we have a combination of both show stopping songs and storytelling that work really well for us.
I believe these methods of set presentation came about as ways for the group to connect to the set more, while being different and standing out. Different groups will connect to their sets in different ways. It’s just a matter of figuring out what you and your group vibe with.

4. How did you all decide on your set for last year's competition?

It was very simple - we all contributed to a google document of songs and then sat together and talked about them. We came out with three different, but meaningful songs that went well together.

5. Based on all of your experiences from last year, what is the key lesson that you're taking into the 2017 competition season?

The biggest lesson we learned: The ICCA competition isn’t the end all be all. There is so much more to the a cappella community than this one competition. It’s an awesome competition, and we are working our butts off this year in order to hopefully be successful, but there are other things that are just as important: group health, overall happiness, paid gigs, recorded music, etc.

Something else I learned while attending SoJam: you have to work super, super hard in order to be successful. We have more than doubled our rehearsal hours from last year, have our rehearsals planned far in advance, and are staying organized and positive. It’s stressful but we are very, very excited for competition and can’t wait to show everyone what we’ve been working on.

6. If you could offer one piece of advice to new groups competing in ICCA for the first time, given your experience, what would it be?

Be patient, it takes time. S#arp Attitude wouldn't be where we are today without the ICCA competition. Set lofty goals and take your time achieving them. Or go for gold on your first try! Either way, just remember to prioritize group health and remain true to yourselves in the process.