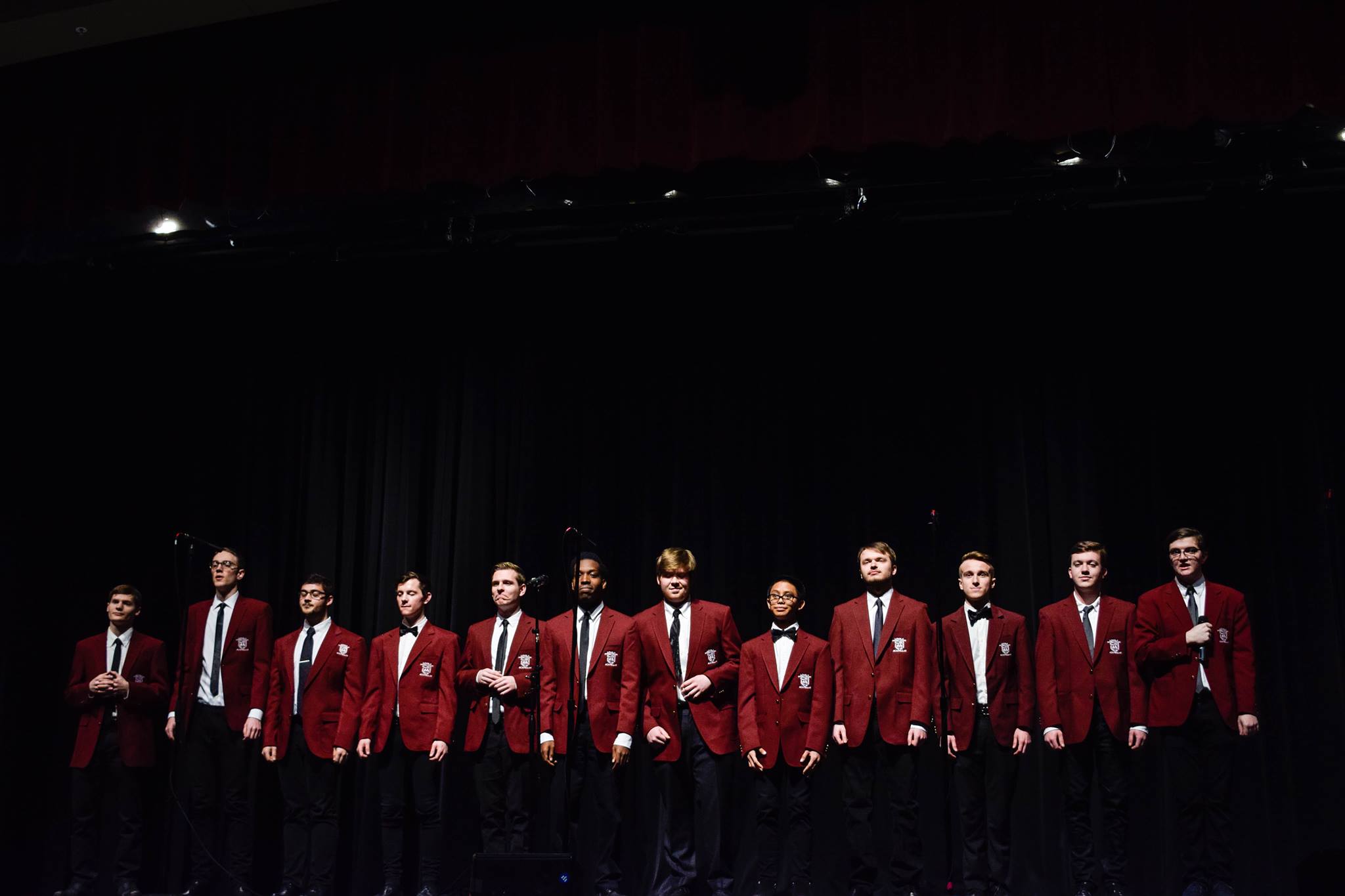 Tomorrow night, see and hear some of the best a cappella known to Chicago. Yes, we're talking the Loyola AcaFellas.

The all-male group is big on making sure that their group, as well as their voices, fit into the Chicago scene. Their talent is only matched by their willingness to give back to the Loyola University Chicago campus, which comes through the types of events the group particpates in, as you will read below. Get to the know the Fellas in the interview below and see them perform tomorrow night, March 16th on our Facebook Page at 7:30 PM/CT.

The AcaFellas were founded in 2003.
After seeing the success of Loyolacappella, the first a cappella group on Loyola’s campus, our founders decided to try and expand the community by forming an all-male group.

In 2011, Fellas adopted our maroon blazers, which we feel solidified our group’s “image”. The goal of the group has always been to enrich the Loyola community and Chicago with great a cappella music, but I would say over the years the way we go about that has changed.

The AcaFellas try and perform a wide variety of music as a way of challenging ourselves while also appealing to as many people as possible. We always make sure to have 1-2 songs that are Top 40, 1-2 songs that are “throwbacks”, and 1-2 songs we just feel deserve to be interpreted as a cappella songs in our set-list at all times.

We’ve been using this system for about 3 years, and we’ve really taken to the process.

3. The AcaFellas currently share the Loyola University Chicago campus with various other a cappella groups. How does the group differentiate itself from these other groups? What makes the group so special?

The AcaFellas are so proud to be a part of the a cappella community at Loyola, including The Silhouettes, Loyolacappella, and Counterpoint. Loyola seems to be the perfect sized campus, as we have just enough a cappella groups that no one seems to be doing the same things as anyone else.

We have an all-male group, an all-female group, a mixed group focused on campus events, and a competitive group. It’s refreshing to feel like you aren’t competing against one another, or stepping on each other’s toes.

4. What current projects are you currently working on? Any new albums, videos, tours, philanthropy?

Stone Cold - NOW Available on Spotify and Apple Music/iTunes
Cheap Thrills - out MARCH 16th on iTunes!
Spring Concert - AcaFool’s Day Concert
Soap and Studs - out in late April. We’re also planning a release party to coincide with the release. You can find out more on our Facebook page.

5. Can you tell us a little about the types of events the AcaFellas regularly perform for around campus?

The AcaFellas try to use our appeal on campus to pull attendees to various philanthropic events, including Relay for Life, The Loyola Dance Marathon, and events hosted by Kappa Kappa Gamma, The Multicultural Society, and even Loyola University Office.

We try and use our image to promote great events and fundraisers on campus, and even promote the school to prospective students.

6. What are some things the AcaFellas like to do outside of music that contributes to your musicality?
I’ve said it before, but a cappella is a community more than anything at Loyola. We’re always there for each other’s recitals, concerts, and study sessions, not just for our own group but for EVERY group on campus.

A lot of our members are roommates. We have alumni that are working together. Music just feels like one small piece of what it means to be in an a cappella group at Loyola, especially the AcaFellas.

The Fellas have seen a boom in interest over the past few years. In my time at Loyola we’ve had some pretty incredible opportunities, including singing at nightclubs and weddings. The Fellas have never aimed to be a competitive group. Instead, we want to support other groups and form a network of a cappella groups so we can all share in our successes.

The Fellas would LOVE to tour. We’ve been working over the past 5 years to make connections with other a cappella groups across the country and build a better network. We’re hoping that eventually we can raise enough money to visit some of our aca-pals all over the US.

A more recent story I’m sure I won’t forget: this past January, the Fellas competed in the GVSU Acapell-Off in Allendale, Michigan. Our set was three songs, the second of which was “Stone Cold”. Now, we know that our arrangement and Chris Arial’s performance of the song is pretty powerful. But at Allendale, that went to a new level.

When we got on stage, the first thing you noticed was that the very front row of this packed auditorium was completely filled with girls, who we would later find out were sister of the sorority hosting the competition. We finished our first song of our set feeling confident, and flowed right into “Stone Cold”.

About half way through the song, we started to get some applause and cheers, all good things. When we hit the last chorus of the song, we were all closer to the front of the stage and could see the audience. As the song ended, people were on their feet cheering. We had a pause in the music before our last song started. In this pause, we started to get a better look at the front row. Specifically, the entire front row of around 30 sorority sisters were on their feet, sobbing and clapping.

The applause lasted almost 30 seconds, which feels like FOREVER on stage. But, we started up into the next song eventually, when the crowd quieted down. It felt like a real accomplishment, touching the crowd in a way that really showed.

10. When you consider the fact that you are one of many groups at Loyola University Chicago, what is it like trying to convince new talent to join the AcaFellas versus another campus group?

As I said before, each group at Loyola has a very different appeal and goal. One of the biggest things we look for, outside of musical talent, is how well we believe you’ll fit into the group socially. We believe that the personality you bring to the group can change the way we learn, create, and perform music.

12. Lastly, could you give us some background on the below photo from your Facebook? What was the event, how'd you get involved, what was memorable about it, etc.?

The AcaFellas have, for the past three years, competed at the GVSU Acapell-Off in Allendale, Michigan. The competition brings in groups from Michigan, Ohio, Indiana, and Illinois, and gives the Fellas a chance to spend a day to travel and hang out with some new a cappella friends. Special thanks to our Ola Wysocki (https://photowysocki.wordpress.com/) for making the trip from Chicago to see us, and taking such amazing pictures of our performance!