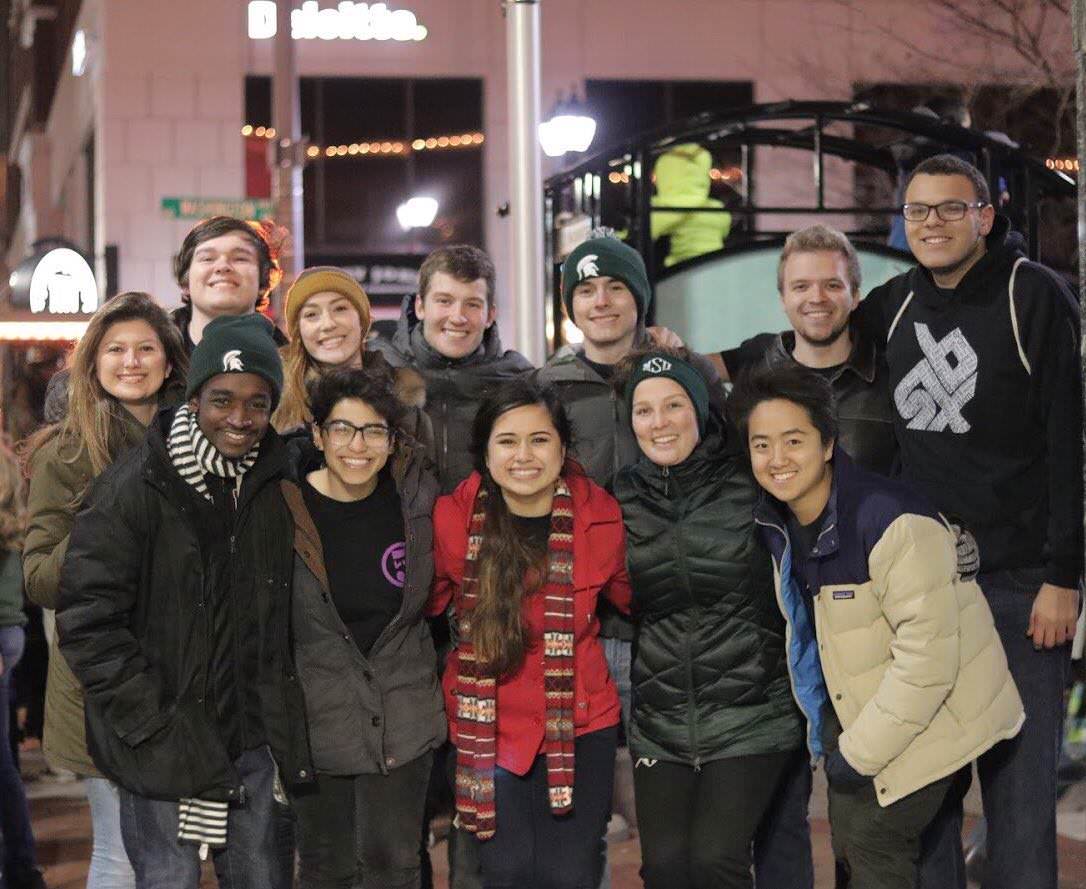 This week, we have a lot to be thankful for, but most of all, we're thankful for all of the amazing groups who grace us with their sensational music. And this Sunday, November 26th, we will truly be graced by some amazing vocals from the talented Michigan State University group, State of Fifths.

Founded nearly a decade ago, the coed aca-group has been making the rounds all over the Midwest from ICCA appearances to collaborations with other collegiate groups. Earlier this year, the group released a visually stunning and vocally sound EDM music video of Major Lazer's "Cold Water." And we hear more new music is on the way. Check out the group this Sunday as they host our next installment of "Aca Live" on our Facebook page.
The stream begins at 8:45 PM/EST.

While you wait, learn more about the group in our featured interview below.


1.  Can you tell me about the group's founding? When did the group begin? Any specific influences, past or present that you all can point to that inspire(d) your style?

State of Fifths was founded in the Fall of 2008. Stemming from a group of people who wanted to make music together, State of Fifths has always prided itself on making highly emotional music that leaves a lasting impression on our audience. We are constantly inspired by many different musicians from just about any genre.

2. What makes State of Fifths so special? What makes members join the group versus looking into other student organizations?

State of Fifths is a huge part of each of our lives. We were initially brought together with the common goal: to make and share music together. But Fifths has become much more than just a music group. We spend time together, we live together, and we become best friends. The friendships are the most important part, and what makes being in this group so special.

3. What are some of you all's favorite performances or moments from the past year or few years?

In the last few years Fifths have been a part of some really awesome events. From ICCA performances in Chicago, Ann Arbor, Grand Ledge, and The University of Illinois, to Acatober fest in Milwaukee, Wisconsin. Fifths love to travel. In a local setting, we were lucky enough to open for Vocalosity, Deke Sharon’s professional group, for a show at the Wharton Center in East Lansing. We also sing in MSU’s annual Acappallooza each Fall.


4. What are some things that you all enjoy doing outside of music as a group?

As a group, we love hanging out with other groups from MSU. We also enjoy spending time together as a group by going to the movies, concerts, or having apartment parties. We also enjoy having retreat weekends at member’s houses.

5. Are there any big plans for the future?

Right now, we are working on a couple major projects for the group. First, we have been in the studio working on a super exciting project (more details to be released very soon!). We are also in the early stages of putting together our 2018 ICCA set! We are also going on tour throughout the state this December, and are excited to be singing for many local high schools.

6. Is there a funny memory or awkward moment from a past trip or performance that stands out in your mind?

About a month ago, on a retreat weekend, we were all hanging out in the basement and the power went out in the middle of the University of Michigan versus MSU game. The weather was so severe that we had to go into one of the back rooms of the basement. Once in there, we all hung out and somehow began singing “Hollow.” By the end of the night the storm had passed and the Spartans won! Just about everyone in the group would agree that retreat was a blast!

7. You all are hosting the Great Lakes A Cappella Showcase next month in partnership with the Vocal Company. Can you tell us a little about the event's conception? What spurred it, what's the goal and what's it like coordinating other aca groups for a showcase such as this one?

Ever since I was a freshman I wanted to put together a collaborative concert with some notable groups throughout the region. Once elected Business Manager of the group, I decided to finally put this idea into action. Along with the rest of the Eboard, we talked about some potential groups that would be interested in putting this on.

After several emails and phone calls, the interest from groups showed a promising start. It wasn’t until a lucky swing of events that the show became a reality. At a rehearsal for the MSU Spartones (a compilation group made of several MSU singers from different groups on campus), I got the chance to chat with Chris Brody, a friend and past ICCA competitor with Oakland University’s Gold Vibrations, about the idea we were putting together.

During that conversation, I found out that he was now working with The Vocal Company as the Great Lakes regional manager, and that he was trying to put a collaborative concert on to gain TVC’s reach in our region. It was through pure coincidence that we both had the same objective. After a quick follow up, Chris connected me to AJ Marino, the Head of Artist Development at TVC, and from there the event became a reality.

8. Back in March we did a write-up on your music video "Cold Water." First and foremost, congrats on the success of the video. For groups who are looking into recording their first music video, what advice can you offer them about the process? How did you choose which song to make into a video, how do you go about finding a camera crew and what other important elements should be top-of-mind?

Putting our music video together was a process that took countless hours of coordination and effort from our Eboard members and the producers of the video. First off, we knew we wanted to make a music video for one of the songs on our EP – Lifeline. We debated back and forth and ended up deciding on Cold Water because of its’ high energy and its’ intricacies in arrangement and vocal percussion.

The best advice we could give about making a music video would be to plan ahead exactly what to do during each video shoot. One of the biggest issues we faced was agreeing on a concept that would work for the video. We ended up needing to shoot multiple times in different settings and ended up using the last place as our concept. Had we planned out exactly what the video would look like, it would have been a lot more efficient.

As far as our production crew goes, the video was created and produced by our own members. Shanice Pinson and Morgan Lalonde filmed and directed the video, both as members of the group. Shanice, who majors in media and information, edited the video with additional edits by Bradley Coster, another student from the college.

9. The 2018 ICCA lineup has been released and you all were selected as a competing group. What does taking part in competitive a cappella mean to you all? And what do you hope to take away from the experience?

Being a group involved in ICCA has been extremely rewarding for us. Each year, we start as a new group with several new members that have never sung together, and after going through ICCA we become way more tight-knit and grow as a group. The competition forces us to work hard to put together a set we are truly proud of, and during this process we come together and are much closer because of it.

The most rewarding part of being in an a cappella group is being able to share our art with people from all over. We are all extremely passionate about music and feel extremely lucky to be able to share it with others. On the other hand, the most challenging part of it is being able to make time for everything. Being both students and singers can be difficult to make time for everything and it can be very stressful at times.

11. Are there any notable events in the music community that we should be paying attention to?

Every year fifths love to watch some of the big events across the country. Our top three events that we watch would probably be: BOSS, BONR, and Vertigo. Each has consistently put out some awesome performances, and we love when videos from those shows come out.

Be on the lookout for a special announcement coming in December!

Aca-Ed was an event that we were lucky enough to host with The Vocal Company earlier this Fall. The event was an idea that the MSU a cappella community had been tossing around for a couple years, and finally came into reality with the efforts of Isaiah Hawkins (our music director) and Chris Brody.

The event was a full day of a cappella workshops, classes, and masterclasses. Groups from across the state came and TVC professionals taught classes and workshopped groups throughout the day. The day culminated with a performance from 7 of the groups who participated in the event.