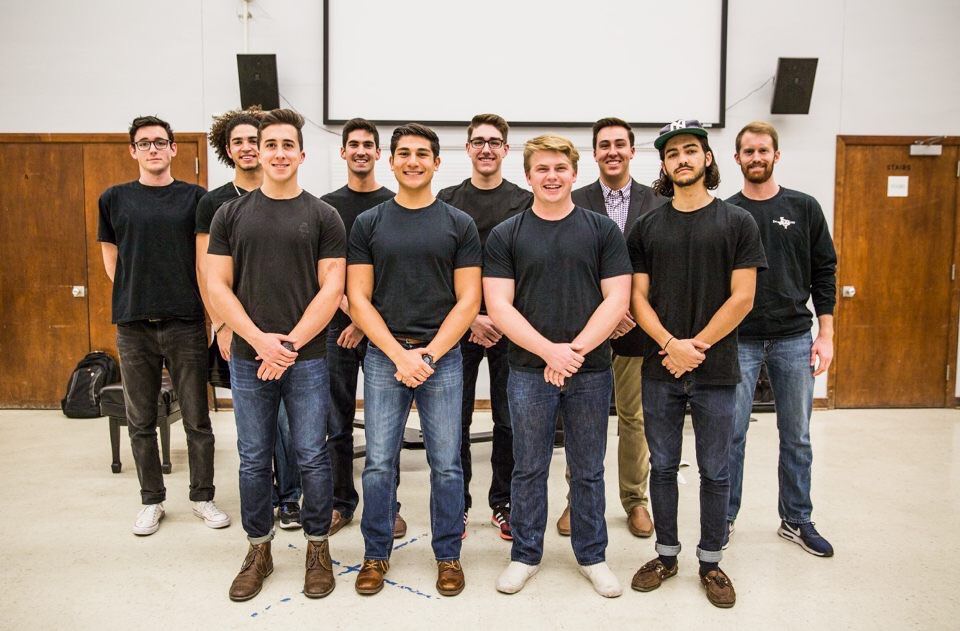 A cappella gets a bit more formal this time around.

That is because this Friday night, the Southern Gentlemen of Southern Methodist University will play host to CollegeAca's "Aca Live." Prepare for khakis, blazers and a collection of wonderful harmonies as SMU's only all-male a cappella group will stream their Fall concert as part of our regular broadcasted series.

Founded in 2009, the music group has become a staple on campus and around their community, so much so that they were even invited to be the opening act for a presidential library dedication. The segment will be streamed tomorrow night, November 17th, starting at 7 PM/CT.
You can view their performance right on our Facebook page.

But before the show begins, get to know the group in our interview with them below.


Can you tell me about the group's founding? When did the group begin? Any specific influences, past or present that you all can point to that inspire(d) your style?

Our A Cappella group was founded in 2009 by Trey Pratt, a student here at SMU. Interestingly enough, when it was founded, SoGents was created to perform more hymnal-type music (gigs at Churches, etc) but it very rapidly became a traditional college A Cappella group! In the words of Trey, he said that they did one pop song and then a semester later they were primarily doing pop songs.

What really drove this change was what our campus was looking for in a men’s a cappella group and the talent that we started bringing in as a group of college guys.

Naturally, being the "Southern Gentlemen" it makes sense that we started off very classy but we definitely still have retained all of that southern-ness and gentlemanliness through our traditional attire (brown boots, khaki pants, brown belts, white button downs, navy blazers).

How does the group differentiate itself from other music groups on-campus? What makes the group so special?

We have a rich history at SMU and are the only all male group, so we stand out in that respect. We take pride in the fact that we have the vocal range to cover all spectrums of notes without the need of female members. From singing at the opening of the George Bush Presidential Center to small sorority serenades we are really involved in so many aspects of campus life.

What current projects are you currently working on? Any new albums, videos, tours, philanthropy, etc.?

We have plans to get back in the studio very soon but nothing is official yet. We’ve discussed releasing a single short term and a video/album in the longer term. [We] have some connections in Las Vegas, so [we are] considering a possible "tour" there in the near future.

What type of events do the Southern Gentlemen typically perform at? And what has been your favorite gig from the last year or two?

We do just about everything. We’ve sung the national anthem at professional basketball games, in front of thousands at a cappella festivals around Texas, and even smaller things like private parties and other events. My favorite event that we’ve done in the last year is A&M’s Annual Acappallooza where they invite groups from around the state and have a massive concert that showcases some awesome Texas talent.

Another great performance was when we were given the opportunity four years ago to sing at the opening of the Presidential Bush Library on campus where we met and took pictures with George W Bush.

What are some things that the Southern Gentlemen like to do outside of music as a group?

The SoGents are involved all over campus. Our current President, Nathan Devera, is the Student Body Vice President of SMU for example. We have majors in the group that range from Vocal Performance to Biology so there’s never a lack of diversity in what we do outside of rehearsals and gigs.

What's it like being the first all-male a cappella group on-campus? Are there any benefits that come with the label (special gigs, song choices, etc.)? Any challenges?

It is such an honor to be the first all-male a cappella group on campus. We truly take pride in it and love the opportunity to continue the tradition of our founders- they are extremely pleased with where we are now. We definitely have access to many special gigs because of it.

Challenge wise, it's really just keeping up with the expectations of our group; , it’s a challenge we love taking head on and overcoming as we continue to succeed.

Also, it has its perks when it comes to doing serenades. Let’s be real, who doesn’t love a group of good looking guys that can sing?

Have you all ever experienced any weird or unexpected moments at a concert or performance? (something an audience member did, sound system go out and you perform with no amplification, etc.)

One time we walked on stage for a performance, the curtain came up, but the lights didn't turn on for a while, so we stood there for a solid 10 seconds and then this faint red light glow came on so our soloist started singing. However, right when he started singing, the stage manager backstage yelled "SHHH NOT YET!" and we waited another 5 solid seconds until the full lights came on. All of this occurred while hundreds of people in the audience were staring at us.

What's something that most people probably don't know about your group or groups similar to yours?

We can't go into too much detail because it stays within the group, but we have a great tradition involving donuts that our members bring to rehearsal. It's a longstanding tradition.

What are the top 3 shows that the group is currently watching/streaming?

How to Get Away with Murder, Stranger Things, and House of Cards.

As mentioned before, we are very sociable and involved people from wide backgrounds! Along with music and arts majors, we have engineers, business majors, biology majors, math majors, student body officers, sport athletes, university organization/club leaders, and so on. We strive to not only be a phenomenal performance group, but a phenomenal group of well-rounded, "Renaissance" Gentlemen.

Lastly, could you give us some background on the below photo from your Instagram? What was the event, how'd you get involved, what was memorable about it, etc.?


This was a Bollywood dance festival thrown by SMU’s Indian Student Association. Initially our business director, Dylan Beams, was contacted by his friend who was an executive in ISA with a spot in the show. We weren’t really sure where we even fit into the show.

It was the first time we have ever performed at this East Asian/Indian event, and we song modern pop songs in a cappella after East Asian/Indian dance groups finished dancing to their cultural music. It was a very lively event, but we truly were out of place. That being said, they were incredibly welcoming!