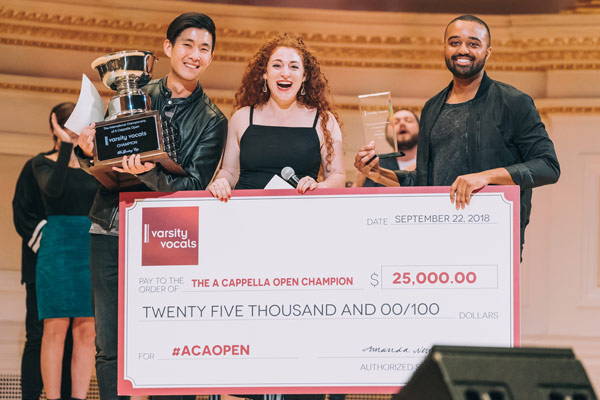 We're only weeks away from the third season of the International Championship of A Cappella Open!

In just under two years, Varsity Vocals, most widely known as the organizers behind the International Championship of Collegiate A cappella (ICCA) and the International Championship of High School A cappella (ICHSA), have once again delivered a smash hit to the world of competitive a cappella with The Open. While ICCA has seen plenty of mainstream success, whether it be the dramatic accounts depicted in Mickey Rapkin's novel "Pitch Perfect: The Quest for Collegiate A Cappella Glory", the hit movie franchise "Pitch Perfect" or simply the hundreds of thousands views garnered from groups posting their sets on YouTube, the competition itself is no doubt a bit segmented.

Groups wanting to take part in ICCA or ICSHA must be affiliated with a scholastic institution, which no doubt dwindles the pool of competitors.
And still, while the format may be a bit strict, each year the level of talent is elevated resulting in some seriously high quality performances.

But the new kid on the block, or should we say new competition, is removing all restraints to determine each year, who the best group in the world is. That's right, this is no longer a scholastic competition, but instead a competition to find the best, no matter the age or affiliation.

The Open, now in its third season, has been making waves as the elite competition in the contemporary a cappella space, and has brought out some unique talent.

In its first year, Women of the World, a quartet composed of various women from different corners of the world took home the crown. And just last year, New York-based trio Iris proved that close harmonies in a small group format could win the championship. And who knows what 2019 will bring.

The lineup has been set as competition begins next month as groups take part in contests spread out across six regions. Each region will see the crowning of one champion, who will then advance to The Open Finals, which will be held on October 5th at Carnegie Hall in New York City. In total six regional semifinalists, two Wild Card Champions and the 2019 ICCA and ICHSA Champions will all compete at the Finals, where the highest scoring group will walk away with $25,000.

It's a riveting competition that offers fresh takes on how groups from all over do a cappella and we cannot wait to see how it all plays out.

Take a look at this year's competitors below. And for the release on the event by Varsity Vocals, go here.

2017 The Open Champions - Women of the World