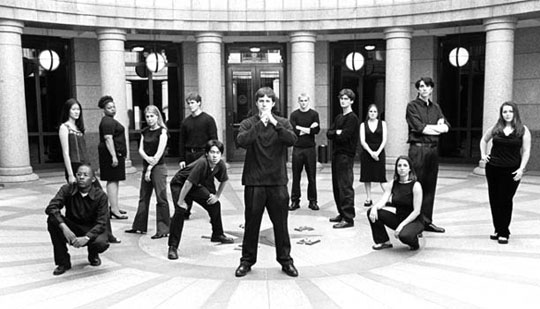 February has been a big month for us as our new series "Aca Live" has already featured three amazing groups. Last week, we broadcasted our very first all-female group. You can read their interview here. This week, we're headed to Texas to feature our first co-ed group, The Ransom Notes from the University of Texas at Austin.

As you will learn from our interview with the group's music director below, the group is an atypical one. They don't compete in events such as ICCA, but are more focused on providing an avenue for singers to make some great music. And they have been doing this since 1996. I'm sensing this decision by the group has contributed to its longevity.
And while they don't compete, they sure have the vocals to do so if they ever decided to go that route as you will see in tomorrow's "Aca Live" stream.

Be sure to hop on over to our Facebook Page, tomorrow night at 8 PM/CT to see them perform LIVE!

1. Can you tell me about the group's founding? When did the group begin? Any specific influences, past or present that you all can point to that inspire(d) your style?

The group started in 1996 by two guys who just really enjoyed making music. They posted flyers around some of the dormitories and buildings and got enough people to audition to have a pretty solid group of about 9 people. Since then, it has fluctuated from as little as 7 to as big as 22 (that semester was a mess) but we try to now keep it in between 10 and 14.

Currently we have 15 members and 4 of us will be graduating in May. I wouldn’t say we have any specific musical influences because the person who arranges music changes every year, but we do have some songs that have been around for a very long time. For instance, Soul to Squeeze by the Red Hot Chili Peppers was the first song the group learned and we sing that at the end of every one of our concerts.

I arrange the songs for the group and I would say I’ve been extremely influenced by Kanye West and Jon Bellion. I particularly like to arrange songs that have intricate rhythms rather than plain old chords.

3. The Ransom Notes currently share the UTA campus with various other a cappella groups. How does the group differentiate itself from these other groups? What makes the group so special?

I would definitely say each group has its own individual style. I can’t speak for all of the other groups, but I’m pretty sure most, if not all, do some sort of competition each year. We’ve decided not to do that because we are all simply here because we enjoy making music (oh, and also we don’t dance).

We are currently in the process of planning a tour to Nashville! That’s about it on our plate right now. We released a music video last semester and I’d imagine we will probably do another either this semester or next.

5. Can you tell us a little about the process of shooting the video for Justin Beiber's "As Long As You Love Me."?

It was so much fun. We first recorded in a studio that one of our former music director’s friends had. Once we got the mastered version, we buckled down and shot the entire video in one day. We filmed most of it on the UT campus and in West Campus.

I think the most fun part of it for us was attempting to act. A lot of us had never done that before and it was extremely difficult trying to keep a straight face during some of those scenes. To film the video, we had a friend film and edit and he also came up with the concept for the music video (credit to Zach Head).

This was our first music video and I hope to do more in the future.

6. What are some things The Ransom Notes like to do outside of music that contributes to your musicality?

Many of us play instruments and write our own songs, and our beatboxer produces his own beats and electronic music. Other hobbies include making soap, playing basketball, and going to 6th street.

7. What do you think about the current state of a cappella? Do you feel groups like yours get enough attention? Do you ever struggle in getting attendance to performances? Too much competition in the collegiate space?

I say the more the merrier. There has been a huge influx of groups on the scene lately and I love it. It has been so fun to see groups that have formed while I was here at UT get sooooo good in just a few years.

The only thing I am not a fan of is that the size of the acapella community has forced us to become political a little bit. We have an “Interacapella Council” that governs our conduct and makes sure everyone plays nice. I’d rather just focus on music.

We don’t usually struggle with attendance because our group is so diverse. Half of us are in Greek life, and other student organizations like Student Government and Tejas are also represented. Our friends usually are reluctant to come the first time, but once they hear us perform, they usually come back.


8. Are there any big plans for the future? Hoping to try out some new genres, collaborate with other groups, travel to perform, etc.?

We have a lot of Frank Ocean songs in the works and I bet we will try and crank out another music video this semester. Additionally, we are going on tour to Nashville and we are doing a performance at the end of the semester with a Ransom Notes alumni who is in a band now!

Ha!! Love this one. One time we were invited to do a “flash mob” during South by Southwest in a fancy hotel lobby. We arranged a mashup of “party” songs (Let’s Get It Started by Black Eyed Peas, I’m Comin’ Up by P!nk, etc.) and our music director at the time jumped up on a table and busted out, “Leeeeetttttttt’s get it started… In heeeeeeeeeeeeerrrree!!” and then out of no where, the rest of the group from all over the lobby joined in.

Little did we know, the people who invited us to do the flash mob never actually got permission from the hotel to do this, so we had security guards briskly walking towards us and we are like hustling away as we are still trying to sing this song.

Everyone escaped with no charges.

10. When you consider the fact that you are one of many groups at UTA, what is it like trying to convince new talent to join The Ransom Notes versus another campus group?

This has definitely been a bigger problem recently. I think the fact that we don’t do competitions/dance is a point of difference for us.

I remember when I joined, the first thing I said is, “Y’all, as soon as we start dancing I am out.” I also think we have a group of extremely cool people that all just happen to be able to sing well. Because we are all so involved on campus, we can usually find younger talent in our respective organizations.

12. Lastly, could you give us some background on the below photo from your Facebook Page? What was the event, how'd you get involved, what was memorable about it, etc.?

I love that photo. We got invited to sing at a wedding in Austin. No one knew we were coming except for the husband. He asked us to sing Somebody to Love by Queen and the bride-to-be started bawling. It was a special (and lucrative) day for us.