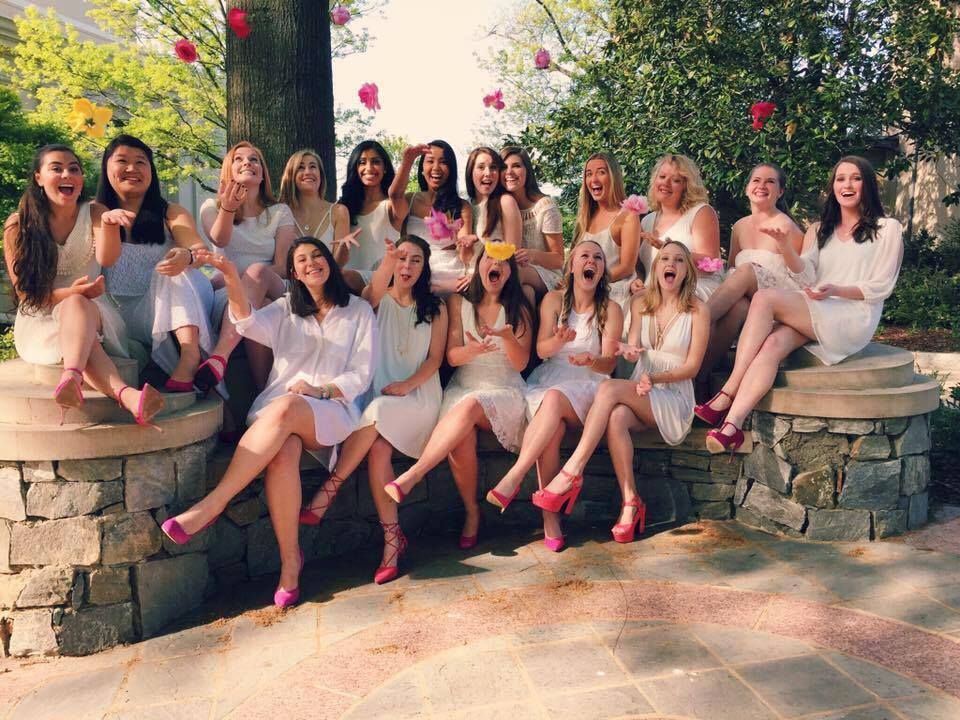 Treble In Paradise To Host "Aca Live" On Feb. 15th

Each week we're committed to bringing you the very best in college a cappella. Not only this but content that you can't get anywhere else. This is one of the aims of our "Aca Live" sessions. And this week, we've got a group that's definitely worth clearing your schedule for.

Our guest group for our next "Aca Live" broadcast comes from the American University in Washington, D.C. and they will be the very first all-female group featured in our new series. They are Treble In Paradise. For over a decade, the ladies in pink heels have been creating beautiful music and life-long friendships, on-campus. As an outsider, you're instantly able to notice the bond these ladies share and it comes across effortlessly through their music.

Enjoy the below interview with the group and be sure to tune-in to our Facebook Page tomorrow night at 8:30 PM/ET to see them perform LIVE!

1.
Can you tell me about the group's founding? When did the group begin? Any specific influences, past or present that you all can point to that inspire(d) your style?

The group was founded in 2004 as American University’s first all-female acapella group. Treble in Paradise has always been known for their signature pink heels.

Treble’s sound is derived primarily from female artists, notably those of Nora Jones, Sara Bareilles, and Ariana Grande. Treble tries to strike a balance between a jazzy yet popular sound.

3. Treble In Paradise currently shares the American University campus with various other a cappella groups. How does the group differentiate itself from these other groups? What makes the group so special?

Treble’s latest project has been recording a music video of our newest arrangement, Shout Out to My Ex by Little Mix, arranged by Maegan Weinhold. This past weekend, we performed for American University’s Founders Day Ball, which was held at the Newseum in DC.

Treble has been performing at Washington Nationals games for the past few years, and it’s always greatly anticipated each baseball season.

6. What do you think about the current state of a cappella? Do you feel groups like yours get enough attention? Do you ever struggle in getting attendance to performances? Too much competition in the collegiate space?

A cappella has grown in popularity over the past few years, and we are very thankful for that. We are always grateful for the support that the a cappella community offers, especially through organizations such as College A Cappella.

7. Are there any big plans for the future? Hoping to try out some new genres, collaborate with other groups, travel to perform, etc.?

As of February 1st, Treble won the Sing Into Spring competition, qualifying them to perform along celebrity acts in the National Cherry Blossom Festival on April 8th. This festival is internationally recognized, as people travel great lengths to see the cherry blossoms in full bloom. In addition to this amazing opportunity, Treble also hopes to record an album to be released in the future that features all of our original arrangements.

8. Have you all ever experienced any weird or unexpected moments at a concert or performance?

We’ve definitely had our fair share of unexpected moments, such as our music director falling on stage, or the mics dying mid-concert, but we’ve learned to take these instances with humor and grace, and not let them affect our performance in any way!

9. When you consider the fact that you are 1 of 4 groups at American University, what is it like trying to convince new talent to join Treble In Paradise versus another campus group?

The caliber of Treble is reflected through our live performances, the gigs we receive, and the media we’re featured in. These things alone lend reason as to why people chose to join Treble. In addition to our sound, our presence is just as inviting, as we are always seen smiling and having fun on stage.

10. Anything else you'd like for our audience to know about the group?

Treble is entirely student run and consists of girls with an eclectic range of majors and minors. While a diverse group in academia and sound, Treble finds unity in their passion for music. As a result of this, the friendships that are formed within as little as a semester can last a lifetime.

11. Lastly, could you give us some background on the below photo from your Instagram account? What was the event, how'd you get involved, what was memorable about it, etc.?

Treble successfully auditioned to perform at the National Christmas Tree Lighting this past December in Washington, DC. The event featured acts such as Kelly Clarkson, Chance the Rapper, the Lumineers, Garth Brooks, and more. Although heels aren’t the ideal shoe for walking around in DC all day, Treble wouldn't have traded this experience for all the presents in Santa’s Sleigh.